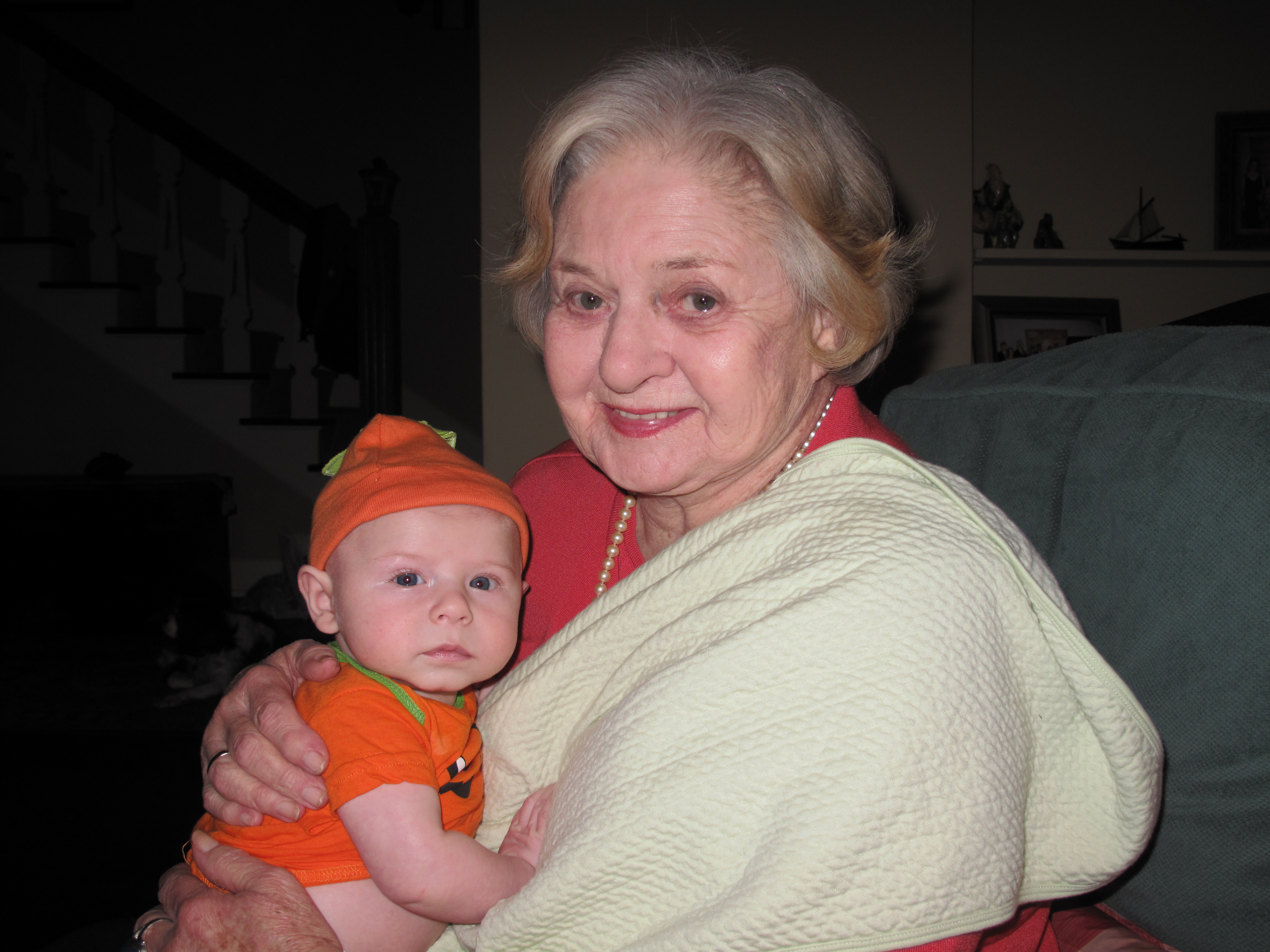 I can’t believe it’s been five years since I posted this the first time . . .

Tonight I am writing on my iPad in a recliner chair at Virginia Mason hospital. It’s 1:30 am, and I just tucked my grandmother (Gamma) in, said a prayer for her, and sang her a lullaby. She may not make it through the night.

As I speak to her I am uncomfortable. Unsure of my words. Can she hear me? Is she scared? What do you say to a woman who should be recognized as a saint? She gave of herself freely and fully to her family all her life. I feel humbled. Scared. Guilty. This past year her memory really slipped and holding a conversation with her became challenging. This was the time when I should have made an effort to visit more often. My effort this past year really didn’t match my high—oh, ever so high—love and respect for her. Last week we celebrated her 90th birthday, and family came in from all over. It was so much fun to see her surrounded by her five children, grandchildren, and great-grandchildren. I unfortunately was consumed with chasing after H and trying to encourage him to politely share his toys with the other children. Aside from a hug hello and kiss goodbye, I hardly spoke with Gamma. I think death always brings out guilt. I could have done more, should have done XYZ, shouldn’t have said blah blah blah. Once I get over myself, I’m able to stop and appreciate all the good times, look back and cherish the bits of wisdom, and remember the great woman she was and our special relationship. 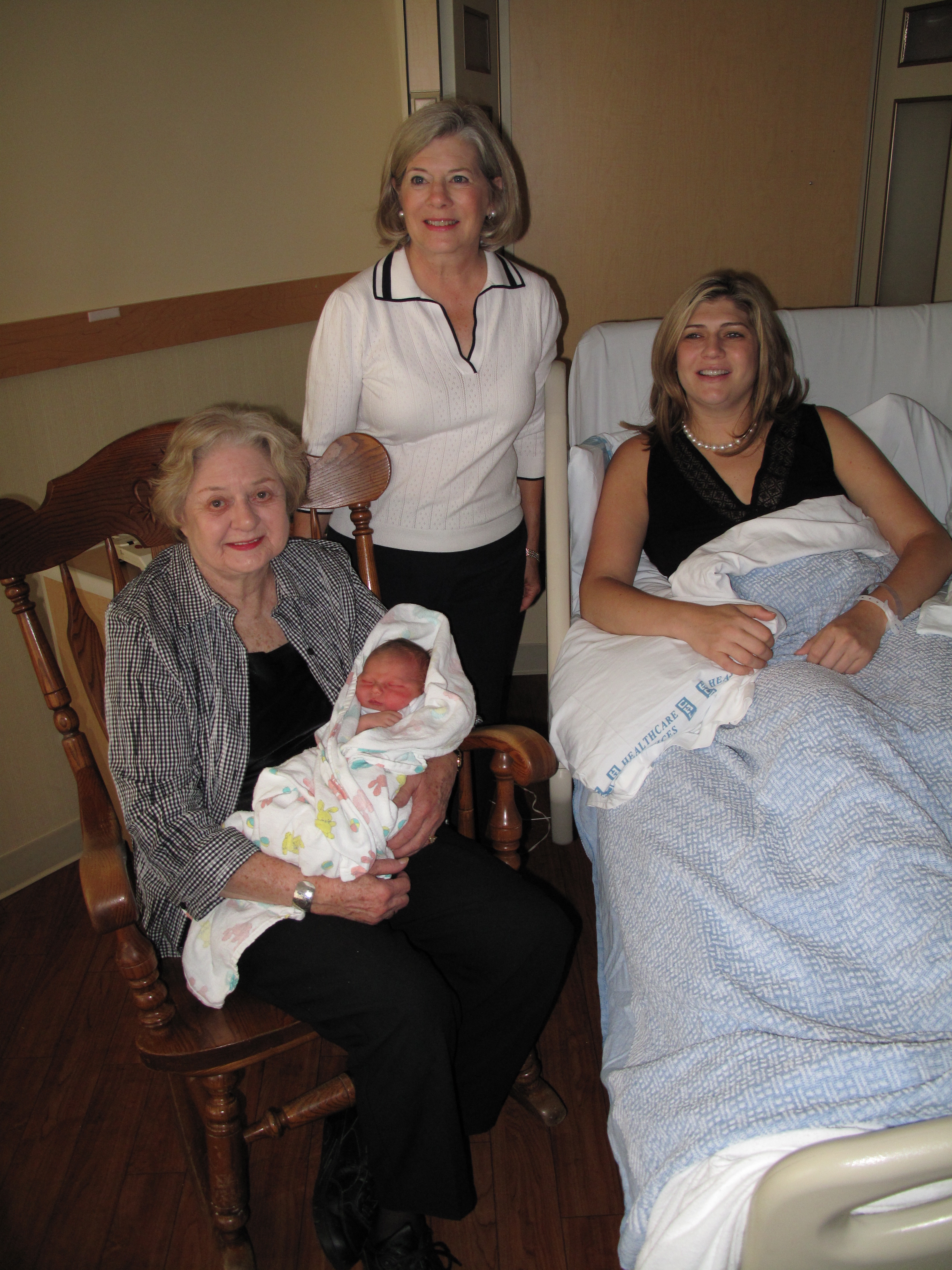 I was raised in a family with the mentality that it takes a village to raise a child. I spent a lot of time with my Gamma. She instilled in me my love for the Lord. She would teach me and guide me in a gentle way, talking about her prayer list as she earnestly prayed every day for her family. Gamma was my prayer warrior. When I was an actress in LA, I would ask her to pray before my auditions, and it really helped me not to be nervous. She didn’t wave her faith around on a big flag for everyone to see. Rather in her nonchalant way, she would let people know the Lord is watching out for His friends. Her stories about God working in her life encouraged me to want to have that kind of relationship with God, where I could hear Him so clearly.

The reason I say Gamma was a saint wasn’t because she devoted her life to charitable causes. She was a mom to five children. Her husband Wally was captain of a ship that traveled from Seattle to Alaska and was gone eight months a year. I asked her this past year if, when her husband was home, she went and did things with friends—nice things for herself. She said no, that when her husband was home she wanted to spend time with him and keep the house running smoothly so he could relax and enjoy his down time. Her whole life was committed to her family. Why are things so backwards today that a stay-at-home mom feels embarrassed that she isn’t a CEO and president of the PTA? Not that there’s anything wrong with those things, but I think women should hold their heads up high when they make their families their priority. I write this and need to take my own advice. I tend to feel like I always need to be doing more, making a bigger difference in my community. But my top priority is my family, and I need to wear that badge with pride. 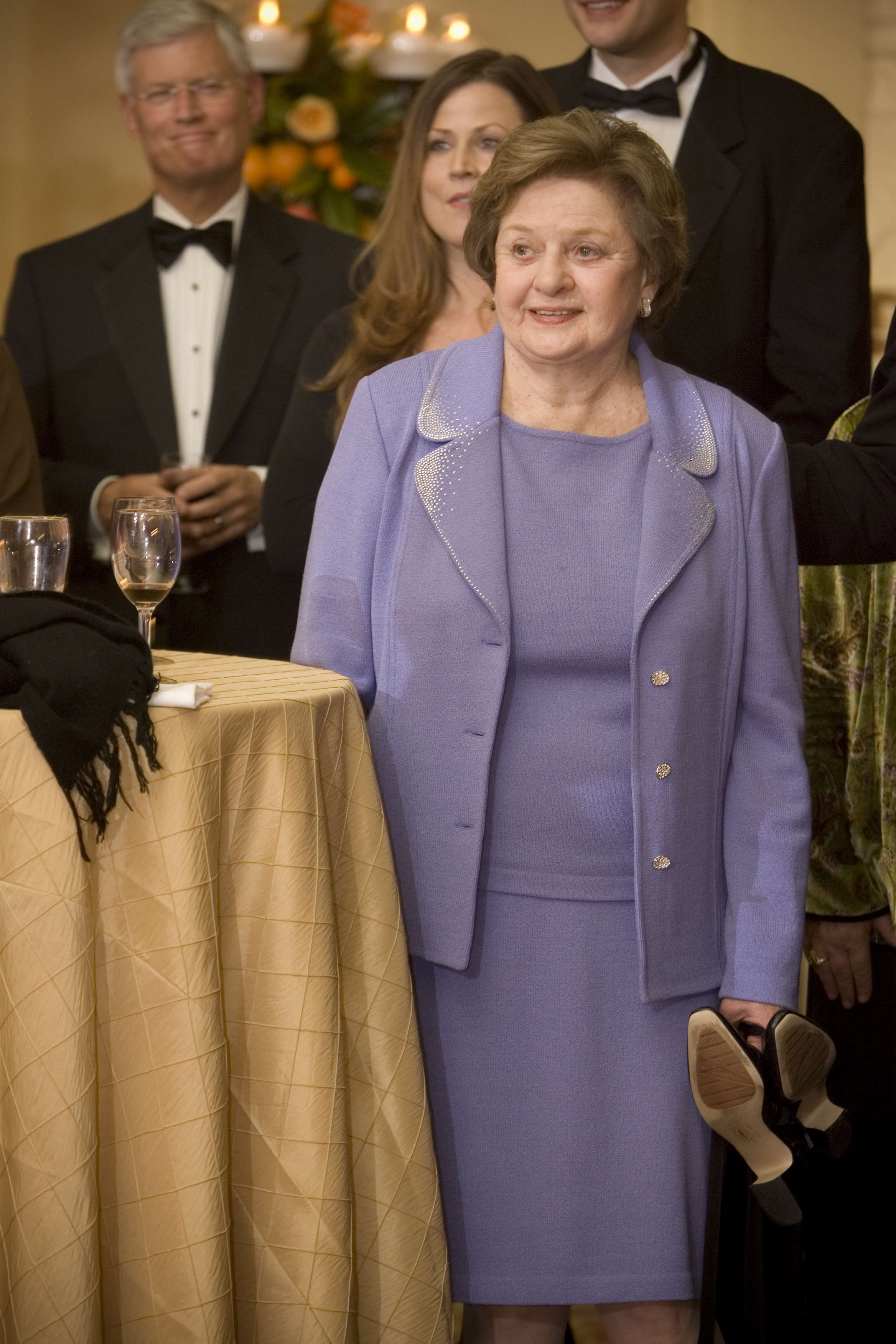 Thank goodness Gamma made spending time with her husband a priority, because one day she received news he had died. He went overboard in a huge storm. Gamma had lost the love of her life, and she never dated or looked in the direction of another man again. She knew one day she would be reunited with him in heaven. Her passing is sad for all of us but really kind of exciting. Finally, she is back in his arms.

Once the kids were raised, she was able to pursue her personal interests. She loved to learn and was always taking some kind of class. She did tons of traveling. She also ate; the woman knew how to tackle a street fair like no other.

The amazing thing about Gamma is I have nothing but happy memories with her, which is surprising for having spent so much time with her throughout my life. Memories of making Slip ’n Slides out of trash bags, sneaking Doublemint gum from her drawer, watching cartoons, biking, skateboarding on the hill in front of her house, hitting Taco Time, and most recently seeing the joy that Hayden brought her. She was so happy to get to hold him as a baby and watch him with wonderment as a toddler. H would be being all rascal-like and she would remark on his cute smile. Gamma had no agenda, just purely enjoyed spending time with her family.

Back to this evening at the hospital: I learned a lot tonight, and I thought it would be good info to pass along, although I hope none of you will need it. 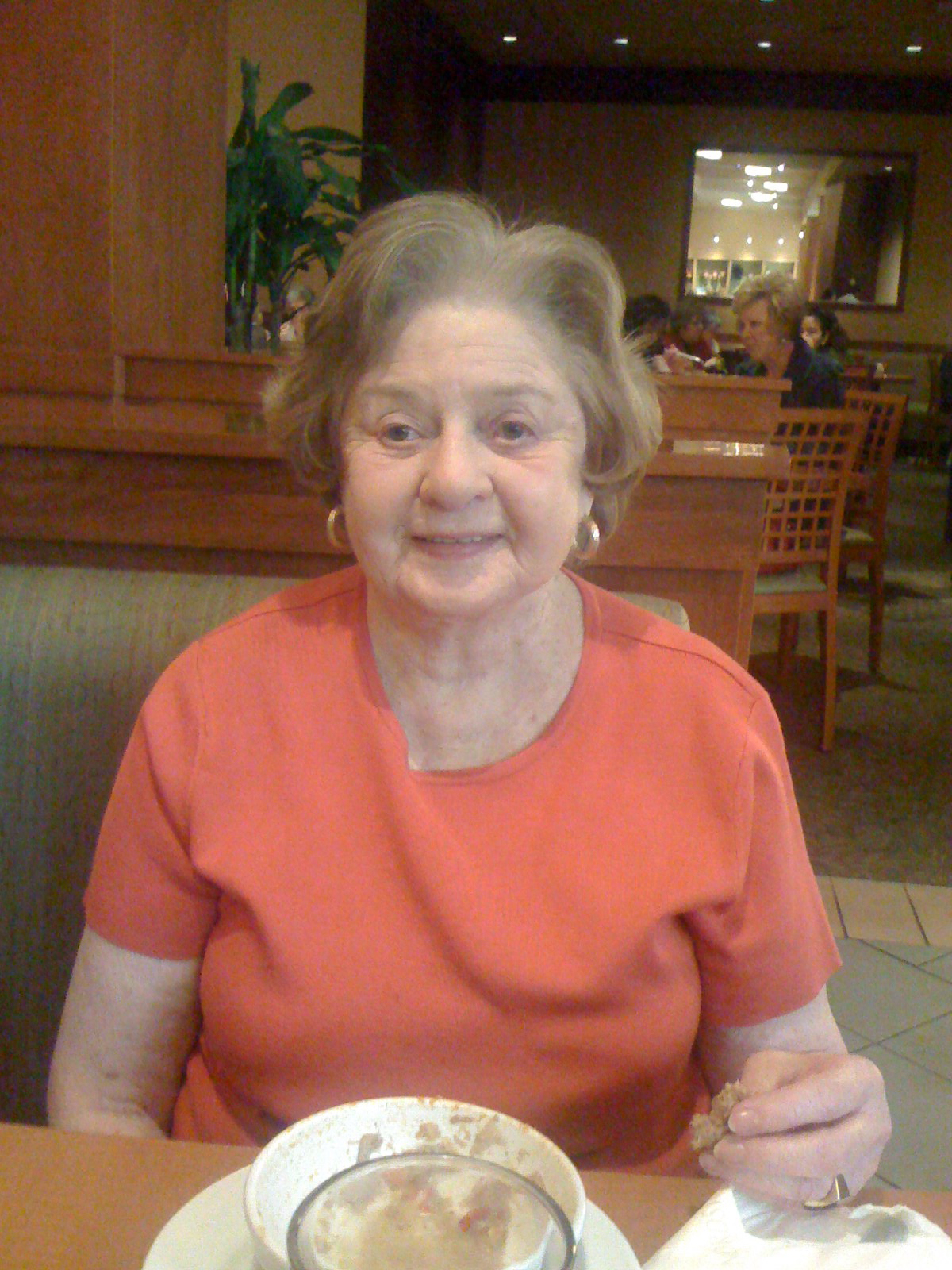 Let me start from the beginning. Late this afternoon, Gamma had a stroke. When the medics arrived she was responsive but not appropriately—meaning she would nod but not answer questions correctly. She was rushed immediately to the ER. We were told there is a blood clot the size of a golf ball on her brain. She could die tonight or hang on for weeks. They detected some pneumonia setting in as well. It was helpful to know at that point if she was or wasn’t a DNR (do not resuscitate). It turns out she is. This means our plan of action is to make her as comfortable as possible until she passes. Now both the doctor and the nurse told me separately that, even though she’s snoring away, she can probably hear everything. The nurse explained that many who come out of a coma say it’s like being trapped in their bodies; they can hear but can’t respond. Others say they are aware of things going on, but it’s blurry like a dream. I thought this was such important information because it’s easy to look at her snoring and figure she’s not really here, can’t hear a thing. Knowing this helped me know how to be there for her. I removed jewelry that looked uncomfortable and told her where she was and why. When doctors came with info, I could explain it to her after they left. The nurse told her what she was going to do before doing it. For example, she would say, “I’m going to tilt you on your side now so you stay comfortable.” I loved the respect she showed her by doing this. True caregiving.

It was a strange and restless night cuddled up on the recliner chair next to Gamma. I was nervous and didn’t want her to die in the middle of the night without me knowing it. I had them hook her up to a heart rate monitor so if she started to slip I could be awake and present for her. As it turned out, she made it through the night and went the next day while my uncle Paul was stroking her hair. I was so relieved for her that she didn’t have to stay in that state for long. She had always said she wanted to die in her sleep, and she did.

It’s hard to believe Gamma is gone. I’m just so grateful for the example she left and I will try to live up to it—to be a godly woman, patient, humble, loving, compassionate, and merciful to the people around me. Goodnight, sweet Gamma. I will miss you.