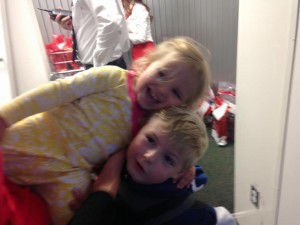 Since I was a little girl I have had a dream of taking my kids to France every summer so the language and culture would be a part of them. Now that Pemberley is two and Hayden five I thought maybe I would give it a go.

I have been speaking French to them since they were in my tummy. They understand pretty well but don’t speak much of it. My plan was to plop them on the beach with French kids and draw it out of them.

I was very, very worried about the flight. Two-and-a-half-hour plane trips with Pemberley can sometimes feel like an international trip. How on earth were we actually going to get through a real international trip??? 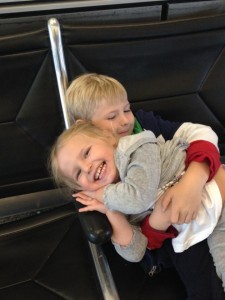 I went to Michael’s craft store and bought tons of little activities. Sort of like stocking-stuffer size. I wrapped them like it was Christmas to make it fun. I filled their carry-ons with these and healthy snacks. One of the best food items I brought was Annie’s brand Mac ’n’ cheese. It comes in a cup and you just add hot water. This was so perfect to have. Especially since Hayden is gluten free and they have a gluten-free one. I also packed healthy lunches with PB and J, veggies, and fruit into bento boxes. This was so nice to have. A nice break from travel snacks.

It worked out super well booking a flight right at their bedtime. I brought Pemberley’s car seat on the flight and strapped her in. This was kind of brilliant for two reasons. One, I didn’t have to worry about it not arriving with the bags. Secondly, she was strapped in and not flopping and running all over the place. She felt secure in her comfortable and familiar spot. They both watched a couple movies and then crashed. It worked out better than I could ever have hoped it would.

They no longer serve milk on planes, so before boarding I bought like four bottles. Pemberley still takes a bottle at bedtime. (She’s two. Don’t judge.) Anyway, I knew if I didn’t have milk on hand it could be a disaster. So if your child has a habit at bedtime, bring triple what you would normally have. If it’s a pacifier, have several. That way if one drops, you are set. 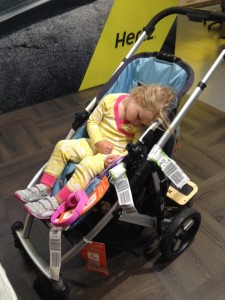 I booked a car in Nice, France, for us to pick up and drive to St. Tropez. This was a bit of an ordeal. I booked a large SUV—an automatic, since I can’t drive a stick. Also booked one with a nav system. We got to our car after a LONG line, and it was a stick. My mom tried to convince me I could drive it even though I’ve never driven one before. I decided I value all of our lives too much and went back to the company. They swapped out for a (smaller) automatic. This was a HUGE ordeal. We somehow crammed ourselves into this car with suitcases on everyone’s laps. Literally we looked like we were in a clown car. We then realize there is no nav and we are about a two-hour drive from St. Tropez with no clue how to get there and it’s nighttime and I’ve never driven in France. Yet again I go back down to the rental car company. Several hours have passed now since we got off the plane and we are all melting down. Just as it looked like we were going to have to change cars again, they found a portable nav system we were able to plug into the lighter. Phew!!!

Point is, things are rarely going to go super smoothly with international travel with kids. Be prepared for the worst. Bags have a 50/50 chance of arrival, etc. Oh yes, pack clothes for a couple days in your carry-on! Be pleasantly surprised when craziness doesn’t go down. Be prepared if it does.

We are loving our trip here. Even though it was a bit of a thrash getting here, so so glad I took the risk.