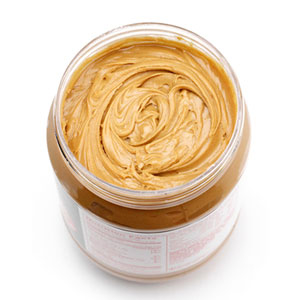 A year ago, H tested positive for a peanut allergy. Since then, I have carried around an EpiPen wherever we went, trying to keep his paws off peanuts. It is a tough job! I had no idea cooking with peanut oil was so common. There have been many incidents where I mentioned the peanut allergy and discovered the chef forgot. Or when I ordered French fries and noticed the big vat of peanut oil next to the fryer.

When H and I were doing co-op preschool, one of the kids in his class had a peanut allergy, so all the parents had to make sure the snacks they brought weren’t made in a factory that processed peanuts. I thought this was extreme and kind of a pain. It was so hard to find things not manufactured in a place with peanuts. Anyway, a year later, I found myself in that mom’s shoes. H’s allergy didn’t seem to be that extreme; I didn’t have to worry about manufacturing plants, so maybe I got lucky.

H is starting school a few days a week at a school that allows peanuts. He would have to be separated from the others when snack time happened. I would need to arm the teachers with the EpiPen, say a little prayer, and hope for the best. I decided to have him retested in hopes that the allergy had gone away. The testing day was a roller coaster. I left the EpiPen at home. The only things on the agenda were a stop at the chiropractor and Virginia Mason for testing. At the chiropractor they have a little play area. I let H hang with the receptionist and play while I got adjusted. When I came out of my room five minutes later, H was happily playing and munching on a cup full of trail mix. I scooped him up and rushed him to VM. Every two seconds: “H, you feel okay?” “Yes, Mama . . . Well, I’m a little itchy.” Panic!!!

Bumper-to-bumper congestion. Go, cars, go! Every second seemed like an hour as we attempted to race to VM. I had a very good friend pass away from an allergic reaction when I was in third grade, so I know firsthand this isn’t something to mess around with. I calmed down once we arrived at the office, knowing that, if something were to happen now, we were in the right spot.

The doctor performed a scratch test to see what was happening with the allergy. The result . . . The allergy had gone away. Really? Woohoo!!! BUT the instructions I was left with were to aggressively reintroduce peanuts and have the EpiPen on hand at all times. The doctor said the allergy could come back once peanuts were reintroduced. So, here we go. Crossing my fingers, saying a little prayer. Being a mother is such an experience—never a dull moment. Who knew it was possible to love to the depths of every little proton in your body and be so consumed? Motherhood is a blessing and an honor and, my oh my, the adventure of a lifetime!