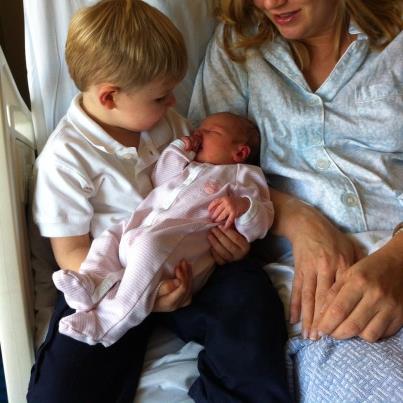 I wrote this while I was pregnant, but I’m just getting around to posting it now.

Bringing a new child into this world obviously brings up a lot of crazy emotions. I have had so many people ask me if I’m struggling with the idea of whether I will love this new baby as much as I love H. To be honest, I hadn’t given it much thought. I have mostly been dwelling on the many speed bumps along the journey of this pregnancy, consumed with trying to be a good mom to H and supporting my husband through his campaign for attorney general. But after having so many people ask that particular question, I thought I had better let the idea marinate for a bit and ask you all, is this something that was a struggle for you?

I remember a Berenstain Bears book where Mama Bear explains that she loves both of her children the same. She says that when her family grew, so did her heart. Hayden truly is the greatest gift God could have blessed me with. I love him unconditionally and more than words could do justice to. I feel though that there is room in my heart to love more like Mama Bear eloquently said—at least I think it was Mama Bear.

A couple years ago, a friend with two children mentioned to me that, at Christmas, when stockings went up, it seemed like one was missing; her family was incomplete. She recently welcomed that new baby into the world to fulfill her mantle/stocking vision. I feel like her in that I sense someone is missing from my life. For a long time I have felt as though there was a child who was mine living in another country whom I was supposed to adopt. I searched around online to see if a child from the adoption sites jumped out at me. Problem was I wanted to bring all of them home along with their four brothers and sisters. I will revisit the adoption idea another day. But for me, the question of if there is enough love to go around isn’t an issue.

The only experience I have with this type of thing is with my dogs. I have adopted two mutts, Pele and Dixie. Pele was my dog when I was single and working as an actress in LA. After moving to the country, we needed to bring another dog into the family, a bigger one to protect Pele from the coyotes in the yard and keep him company while I was running around with my new husband. Truth is, when we brought Dixie home, it was really hard. Pele hated this new dog trailing around after him, jumping on him and stealing the spotlight. BUT now they are best buds, inseparable. From what I have seen with my friends who have brought home a second child recently, it was a similar situation. There was initially a ton of jealousy and frustration toward this loud spotlight stealer. But eventually that subsided and they became pals. The protective older sibling thing kicked in, and they lived happily ever after . . . well, until the baby started grabbing big sibling’s toys.

So for you mamas to be who might be struggling with this, all I can say is I’m sure you will be surprised at the love you will feel. I bet the relationship will be different from your relationship with your older child but equally significant and beautiful. One last thought on this: I have one friend who was struggling so much with this that she sought out a counselor to guide her through it. I think that is brilliant. You can often find free counselors through your local community center, or if you have insurance, many counselors accept it. If you are struggling, talk it out!